Video games and marketing have an interesting history. From major wins like the Robin Williams Zelda commercial to the not-quite-thought-out staged protests against Dante’s Inferno, marketing related to video games tends to get big fast if done right. Still, these campaigns were focused on directly funneling attention towards the game itself. When it comes to Pokemon Go marketing, however, the benefits are up for grabs — so long as you know how to use them!

What is Pokemon Go?

Whether you have an avid interest in video games or not, most people have heard about the Pokemon franchise — or can at least recognize its popular mascot, Pikachu. For those of you completely in the dark, Pokemon is a series of video games (and graphic novels and a very long animated series and movies!) that revolve around a fictional world inhabited by creatures called Pokemon (Pocket Monsters) that are captured and trained by humans. Sometimes these creatures do battle, sometimes they’re just sort of service animals, sometimes they’re studied — regardless, the overall goal is to catch and raise these critters and occasionally pit them against one another.

Pokemon Go is a mobile app that uses Augmented Reality (AR) technology to impose images of these creatures on screens overlaying the real world. Using a Google-Maps-esque user interface, it encourages players to run around and explore their location to find these monsters, which pop up across the map from time to time, in order to capture and train them to do battle on certain points of the map. Simple, right?

Why Should I Care? 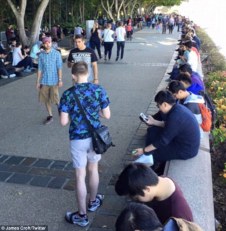 You should care because Pokemon Go isn’t just aimed at kids with pocket change. Many, many Millennials are out there every day instead of being cooped up inside their homes and exploring new parts of their neighborhood. In addition to that, they’re meeting and socializing with people they possibly would have never met otherwise! And it’s not just Millennials, either. On my own personal Pokemon Go adventures, I’ve stumbled across parents in their 40s sharing the experience of catching virtual Pokemon with their younger children — and even enjoying it without them! If you’re aiming for this sort of audience you need to understand the leverage you could have thanks to this app, especially since it’s only going to improve with time and build in popularity.

How Do I Use Pokemon Go Marketing?

The answer is simple: Get these Pokemon Go trainers to hang out at your place. In order to do this, you’ll need to learn a teensy bit more about one of the game mechanics: Poke Stops. Poke Stops are random points all over the map at which players can pick up new items just by visiting the location. Poke Stops can also have Lures attached to them, which draw Pokemon to their location for 30 minutes.

If your business is close enough to one of these Poke Stops, all you need to do is drop a Lure on this locale and wait. Invest in a charging station or two (since the app can drain a battery quickly), advertise your awareness of the app, and encourage your employees to familiarize themselves with it — especially those of the millennial generation. Pokemon Go players would much rather catch these creatures in the comfort of a booth in your coffee shop than standing outside sweating in the summer heat! Plus, it’s a great way to draw shy folks out of their shell by putting them in what they perceive to be a safe, encouraging space.

Getting a Lure item, however, will cost you a little bit of an investment. Lures are purchasable via microtransactions in the Shop section of the Pokemon Go app. A package of 8 Pokemon Lures (4 hours) costs 680 Pokecoins, with roughly $1 USD = 100 coins. The more coins you buy, the less it’ll cost, as with any ‘b uy in bulk’eal, though, so if you want to drop $100 for 14,500 coins, be our guest!

My recommendation? If you’re a small business owner and close to a PokeStop, spend $10 for roughly 8 hours of Lures and experiment. Make sure you advertise your awareness of the app and see how your customers respond to see if it’s worth further investment, testing on different days and different times of day to maximize exposure. Just like in the Pokemon Go app, it can’t hurt to try and catch ’em all!

Are you a Pokemon Go player? How do you feel about Pokemon Go marketing? Comment below!

For additional reading, you can also check out: